I have hit the jackpot! Things have been building up over the last while and today was the day that *I* won! We have four beautiful boys, and I love them all, however, there is one that does not think nor act like the others; he is my special one and he has a heart of gold. I have spend many years and many tears and many prayers trying to figure out how this one special boy thinks so that I can teach him the best way for him, and until now I have been at a loss.

My black sheep is intelligent and extremely artistic. He loves to look at something and rattle off 100 different “useful” uses for any piece of garbage that I want to throw out. I feel bad about telling him “no” on almost everything he wants to do, but I know that he will create his masterpiece and in the meantime create this amazing pile of mess to go with it. What’s the problem? The problem arises when he is unable to clean up. It is not that he refuses, it is that he just can’t. This goes for everything from me telling him to put the hat away to cleaning up his room, to just gather all the clothes on the floor and put them in the laundry and it does not matter if they were worn or not, I’ll just wash them all again. He cannot even do that. It is too much and too overwhelming. This is the reason why I do not let him cook or do much in the kitchen. He will make a mess and I will be the one left to clean up. Other boys just don’t make the mess to begin with so they do not have as much to clean up and it is easier for them. My special boy, well, I think it is just part of what makes him special. A mess will be made, and he does not realize he is doing it for he is so into making whatever he is making.

He has a wonderful knack for languages. My husband had to go to the Philippines and so he was trying to learn some Tagalog so he can be polite and say some basic phrases. (Though all Filipinos know English he found out.) My husband also likes languages. For those who have not heard Tagalog before, it requires at least double the amount of syllables to say anything you want to so that is one of the things that makes it very difficult to try to learn. My special boy – well, let’s just say that several months AFTER Daddy went on his trip, and way after we stopped trying to learn, this special boy still had some of these phrases memorized and was able to spu them back out. This was true for other languages that we have dabbled into as well.

This boy cannot learn math facts, and spelling is out of this world. One thing I have discovered over the past year is that unless he gets the right amount of sleep, he tantrums really good, and it can happen over fairly minor issues that usually do not bother him so much. He is a very “feeling” kind of boy and “feels” that people do not like him (and even though we point out that most phone calls for boys are for HIM, not his brothers…. it is still enough to make a mother cry!) Trying to teach him his stuff is very hard. He was a later reader and just this past year has flourished in his English reading. Hebrew reading… don’t ask. We daven out loud and I have spend various stretches of time over the past few years trying to get him to at least point to the words for he has it all memorized. I figured he was a whole word learner and the problem with Hebrew is that he does not know the language, so it is hard to look at a word and have it mean anything. He still learns things differently than his brothers for the other stuff, and I have slowly, through trial and error, found a few things that have helped a bit.

His diet is fairly good. We only drink water and milk in the house, and other fancy drinks (including fruit juices) are occasional treats that are kept to times like kiddush on Shabbos morning at shul. I have not used white flour in years (except one time last year when we were on a trip and I had no choice,) junk food is the same as fancy drinks. I prescribe to the “real food” menu and so I make my own foods from real stuff, not boxed, processed items. He does love his carbs and will eat virtually only challah on Shabbos if I let him, but he does eat a lot of fresh fruits and veggies, along with his milk and I do not worry that much. No, I do not believe it is food that is the issue. There are no eye issues that would cause reading problems. (He now reads English pretty good, and has made huge strides this year.)

And then, lights went on in my emails this morning! One of the lists that I am on posted something about her daughter that resembled my son. I had emailed her privately several days ago, and today, I got both her response and another post to the email group basically stating the same things which just made everything make sense. My son is a RIGHT BRAINED person! I never really thought about it before for some reason I just associated it with left handed people. (Never mind that my left handed son is not like this at all.) Here is a chart taken from here that shows the main differences between Left Brained people vs. Right Brained People. 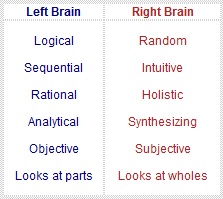 Below are some links to some articles that I found today. It is such a relief to find something that makes sense. I can now work with it. So much has now been lifted off my shoulders. I even found an online test where you answer questions and they let you know which side of the spectrum you fall in. Yes, my special boy was very right-brained. I have come across some ideas on how to help my child. I think I also now know why it was so hard to get him to do anything – I”m sure it is is very stressful trying to learn in a way that you cannot really learn from, and with me not knowing how to teach him, I just continued on the same broken path, and therefore was very taxing on his beautiful little brain. He would spend a great deal of energy just refusing to do a 30 second job, but that was his way of trying to get some space. Last week was hard for he went to bed late most nights and was tired the later half of the week. I ended up just ignoring his tantrums and let him have his space. When he was ready, he came out and did what he needed to do.

I now feel like I can fly and am looking forward to the coming year and helping him to really grow to his potential. I am still not sure how to do it all, the next step is for me to learn what to do, but just the fact that I know WHERE to look is half the battle! I’m off to bed with a happy heart, those prayers and tears have not gone unanswered, and did you know that Albert Einstein was a right-brained person, as well as Newton, Galileo, Aristotle, and Benjamin Franklin? 🙂